Organizing a trip during the cherry blossom in Japan means immersing yourself in a particular atmosphere made of breathtaking views: I thought that such a trip deserved a complete guide to optimize the time during your stay in Japan in one of the most fascinating moments of the year. 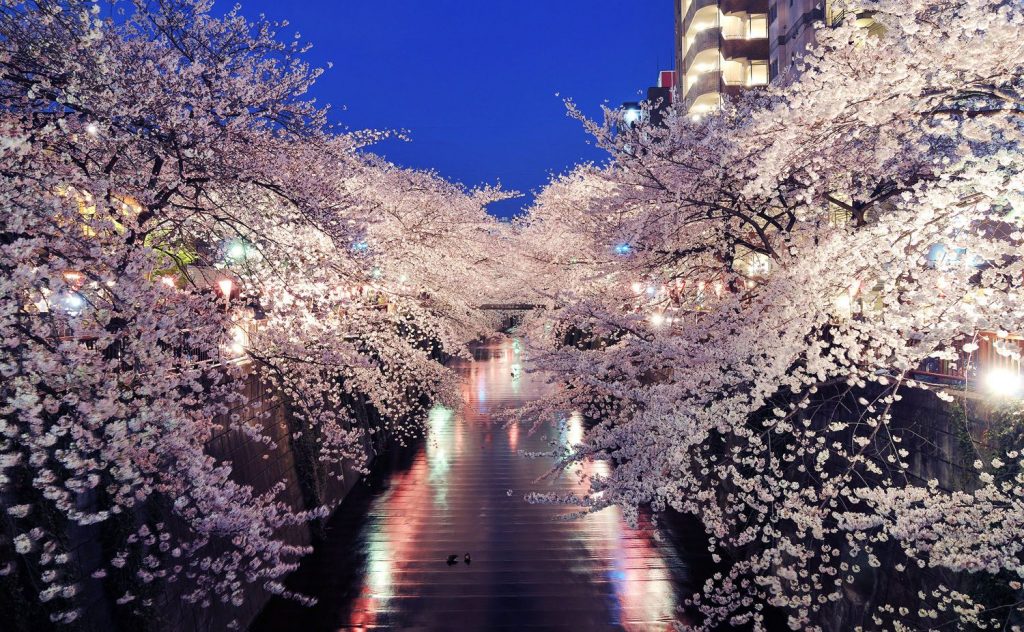 Hanami: the importance of cherry blossoms for the Japanese

The word Hanami is composed in Japanese of two kanji which mean “flowers” and “look” respectively. During the spring period of flowering, the Japanese stop to admire this wonderful show characterized by a shower of pink petals that fills parks and courses of ‘water. The beauty of nature, the celebration of which is at the center of Japanese culture and Shinto religion, is not just an entertainment show: Hanami in fact, hides a much deeper meaning.

The fleeting beauty of cherry blossoms illustrates all too perfectly that nothing in this world is permanent, at some point everything disappears. A sad but beautiful admiration for this awareness has been an important part of the Japanese mindset since ancient times. In Japanese, it’s called “mono no aware”. This mentality can be found in the smallest things of Japanese daily life: life is renewed with each cycle as every year the cherry trees return to bloom.
Hanami is a moment of deep reflection, meditation as well as celebration and joy for the return of spring. 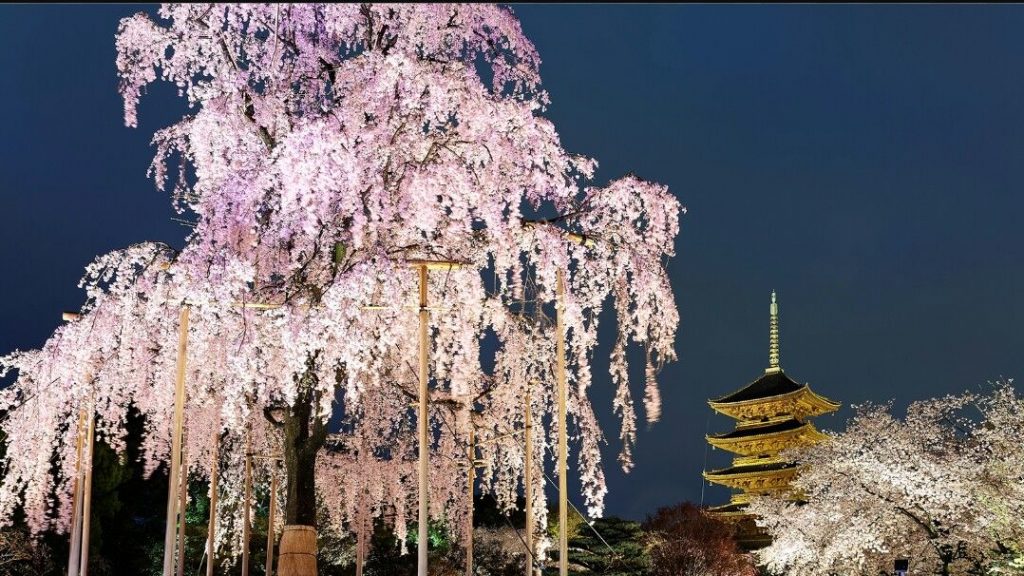 When Hanami is celebrated

Cherry flowers usually bloom in mid-March in southern Kyushu and last until May in northern Hokkaido. Each year, the Japanese Meteorological Agency releases several cherry blossom forecast bulletins that indicate the start and peak flowering period for major locations in Japan’s 47 prefectures. The data are very precise, as flowering lasts about ten days and the Japanese have to organize themselves to find a suitable time for their picnic.

In fact, the cherry blossom in Japan brings with it customs and traditions: these picnics are a demonstration of this. These celebrations can last a whole day, but also extend beyond as many trees are illuminated at sunset creating a very suggestive atmosphere. 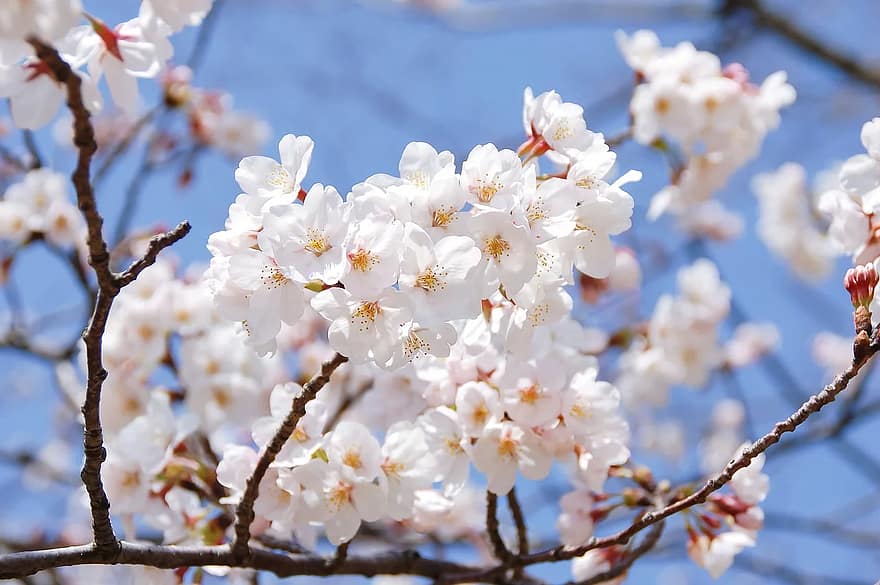 “Book your flight to Japan and save money”

Traveling during the cherry blossom period in Japan is certainly not cheap, but with a little foresight you can save something. Usually a plane ticket to Japan with one stopover, including taxes and luggage, ranges from 600.00 Euros – low season period – to 1000.00 – high season-.

The airlines with the best value for money flying from Rome and Milan are:

. Emirates: their flights allow you to break the long flight to Japan in two, making a stop over in Dubai after about six hours of flight and landing in Tokyo or Osaka after another nine. These flights almost always land in the late afternoon or late evening and this allows you to better manage the jet lag(eight hours).
. Qatar: their flights have the same characteristics as those above, with the only variation of Doha instead of Dubai for the stopover.
. Lufthansa: German flights, on the other hand, almost always have a good price / quality ratio, but do not allow you to break the flight fairly since the first stop in Frankfurt or Munich you have after a few hours of flight while the second route you have to deal with will be nearly twelve hours. Landing in Japan in the morning or early afternoon could complicate the management of the jet lag a little since, while for you it is one in the morning (obviously in Italy) you have actually just started your day in Japan. 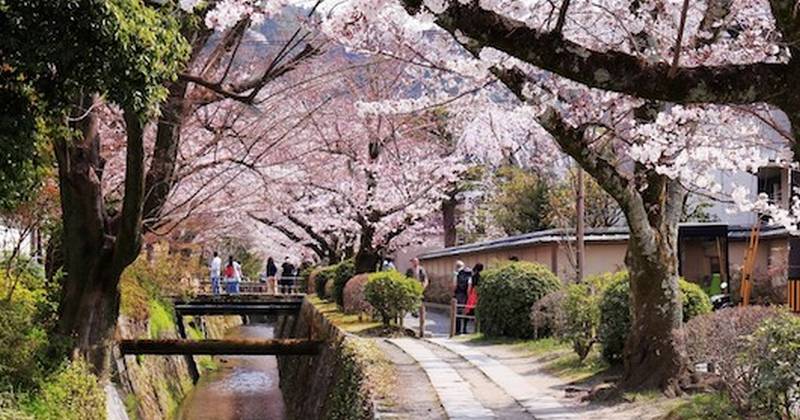 The best places to see cherry blossom in Japan

The best places to see cherry blossom in Japan are located all over the country: below you can find a list with the top 10.

Many classify Nara prefecture as one of the best places to see Hanami. The festival at Koriyama Castle attracts around 300,000 people and takes place from the end of March until the beginning of April. About 600 lanterns light up the flowering trees to create an almost fairytale-like landscape for all visitors. 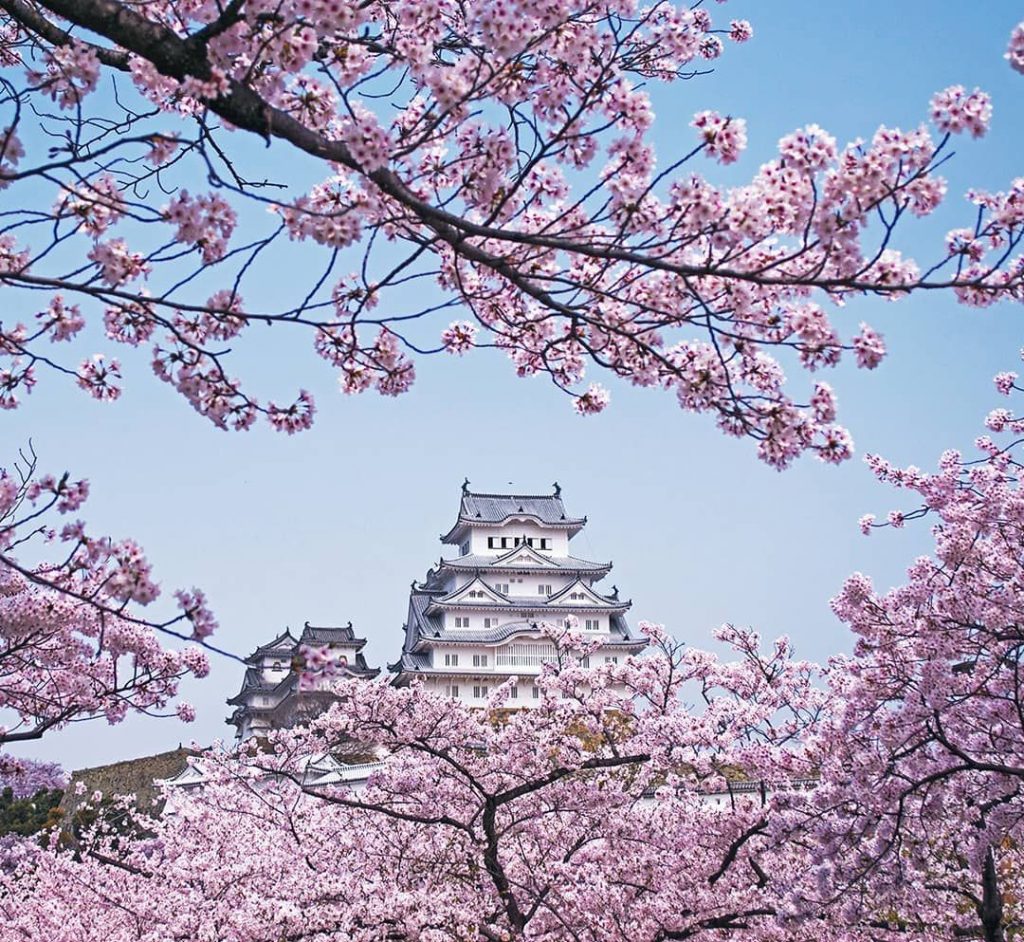 The star shape of this island-park makes it unique at any time of the year, but seeing it during the months of flowering means you will be breathless 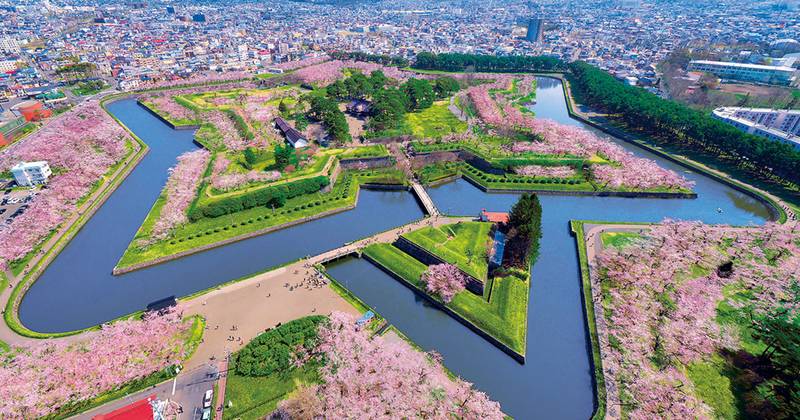 It will be enough for you to walk along the river bank to feel like the protagonist of a fairy tale, but if this is not enough for you, you must absolutely go to the Ninna-ji Temple. This place in fact offers the classic view of the sakura with a five-story pagoda in the background. But the real jewel of the temple is the small forest of two meters high omurozakura trees that blooms at the end of the Hanami season.

An incredible park in Fukushima where you can stroll surrounded by pink. Located in the northern part of Japan, it gives the opportunity to witness flowering even after mid-April.

This small castle in Aomori prefecture, surrounded by a moat, towers above cherry blossoms in spring, creating a memorable backdrop. 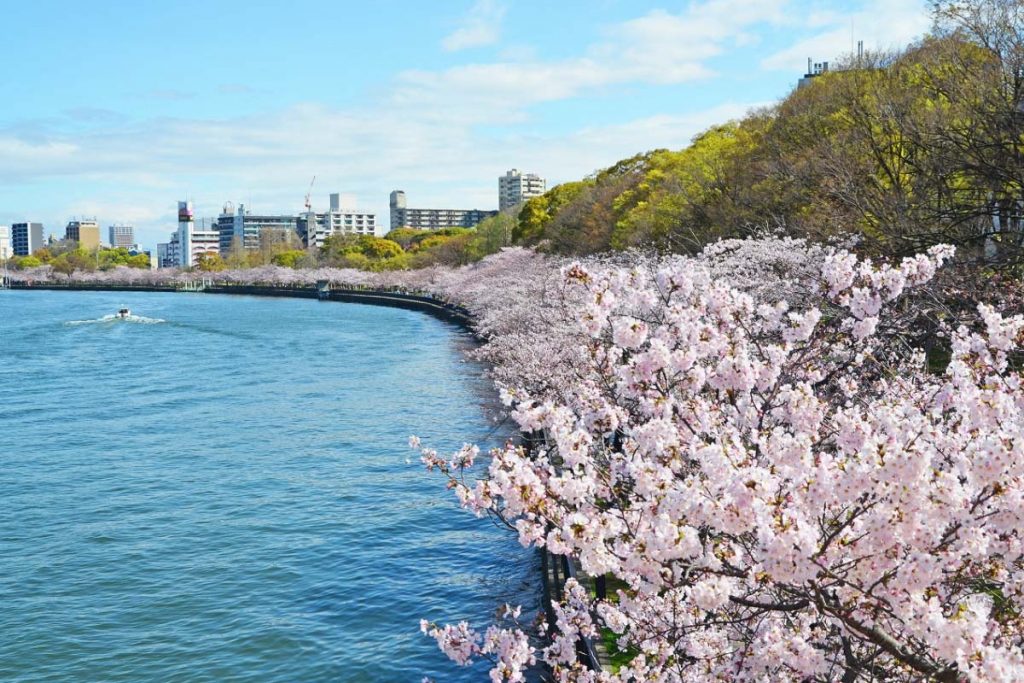 This park in Osaka, during the spring, turns entirely pink and is filled with street food stalls. Spending a day here is an unmissable time at this time of year.

Even a city like Tokyo provides incredible glimpses to witness the cherry blossom in Japan: the Gyoen is the most beautiful of the demonstrations. In this park you will literally forget the traffic and crowds of one of the most famous metropolises in the world.

Located in Kanagawa prefecture this castle isn’t well known to mass tourism, but that doesn’t mean it doesn’t deserve your attention. Like Himeji Castle, Odawara Castle is also located in a wonderful park.

The black of the castle and the pink of the cherry trees represent one of the most fascinating contrasts of the living paintings that can be admired during the cherry blossom in Japan. 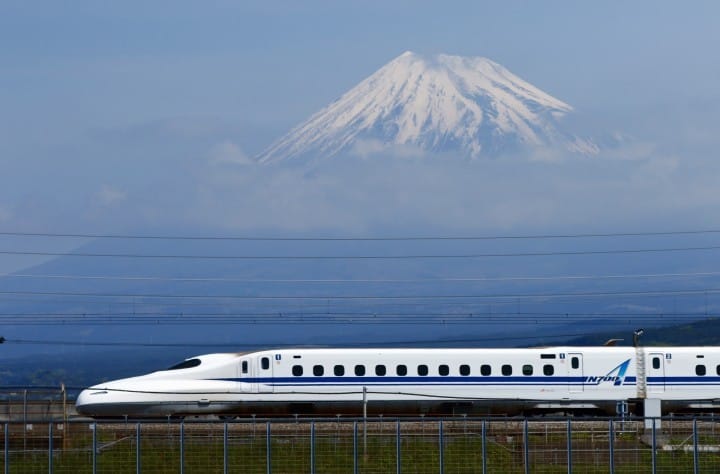 How to get around Japan saving money

Organizing a trip during the cherry blossom in Japan means taking into account that you have to plan your trips as much as possible given the amount of visitors arriving in the country.

Once you have decided the itinerary thanks to the Japanese calendar that shows you places and moments of the Hanami, you must evaluate the purchase of the “Japan Rail pass”, that is the train ticket that allows the use of any service of Japan Railways, including very fast Shinkansen (except for those named Nizumo, Mizuho and Hayabusa) whose single tickets are otherwise very expensive. The Japan rail pass can only be purchased before your arrival in Japan (its duration is 7,14 or 21 days): it is valid for 3 months from the date of purchase and must be activated in Japan by replacing the voucher you receive for mail with the official one.

If you have come to Japan to visit only the city of Tokyo or Kyoto, you shouldn’t consider this purchase.

If planning all this sounds like a complicated affair, I remind you that Souri Trip takes care of drawing up your Hanami itinerary on your own with care, professionalism and flexibility.

Three steps to build your perfect itinerary together:
1) Tell me what traveler you are;
2) We find your destination;
3) I will organize your tailor-made trip,
taking care of everything.

How to plan a trip to Guatemala

Our trip to Guatemala was one of the most beautiful surprises we could experience: planned by pure chance it represented [...]

How to plan a trip to Australia with children

The article in question is a real guide for those who need information on how to plan a trip to [...]

A trip to South Africa is a dream of many characterized by breathtaking landscapes, green expanses that alternate with mountain [...]

Today I want to take you to a magical place, in one of those places that you will hardly be [...]

There are places that strike you more than others, not so much for what the eyes see, but for what [...]

Organize a trip to the Maldives

In this article I will try to explain to all fans of white beaches and crystal clear waters how to [...]

The 15 most beautiful beaches visited during my trip

Who, among us, hasn’t dreamed, at least once in their life, of waking up in the middle of a heavenly [...]